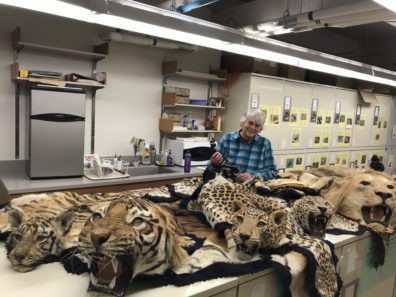 In charge of over 61,000 specimens, Dr. Kelly Cassidy is the behind-the-scenes wizard of WSU’s Conner Museum.

Asked what it’s like being the curator for the Conner Museum, her response was simple: “I have the best job in the world. I learn something new every day.”

But there are often surprises – it’s not just local fauna on display. For example, the museum houses one of the largest collections of birds from Mariana Islands; the museum was able to get these birds from the other side of the world because a former graduate student worked for the US Fish and Wildlife Service. The museum also has one of the largest collections of elephant teeth from Uganda because a former WSU professor, Dr. Irvin O. Buss, studied African elephants in the late 1950s and sent teeth back to Pullman just for the collections.

Cassidy has been helming the museum for a while now. When she began her work as curator 13 years ago, none of the collections were on computer file. If someone wanted to look at the rodent records from Spokane County, someone would have to go through and look at all the labels on thousands of rodent skins and skulls and write down that information. Cassidy decided that having computerized records were essential. She began with the massive bird collection, and over the course of several years, entered them in. Eventually, she received an NSF grant to hire students to help finish the computerization. Having specimens within a computer base allows researchers to find the specimens, and put in requests for them.Cassidy began her work in Pullman following a postdoc in Seattle. She came back for a temporary job, only to then have the curator job become available. Wanting to stay in Pullman, she instantly jumped on the opportunity, and has never looked back.

Cassidy received her bachelor’s degree in physics and math from the University of Texas. She began graduate school with the goal of ending it with a degree in physics, but kept finding herself drawn to biology journals in the library. Cassidy decided to earn a master’s degree in biology from the University of North Texas, having never taken a biology course before. There, her projects involved water toxicology and satellite imagery. She came to WSU for a PhD in botany under Dr. Dick Mack, focusing on invasive plants. During her post-doc at the University of Washington, she was the Washington state project leader for the Gap Analysis Project (GAP). In her time as GAP leader, she used satellite imagery to map vegetation across the state, modeled the distribution of terrestrial vertebrates and overlaid the vertebrate maps on land ownership to identify “gaps” in the protection of vertebrates in the state.

Recently, the Conner Museum was lucky enough to receive a donation of five big cat rugs. The collection includes an adult male lion, adult tiger, juvenile tiger, and two leopards. A WSU economics professor, Robert Wallace, shot them in the 1950s; he later regretted killing them and stored them away in a chest. His daughter came across these pelts when cleaning out his house. They will be used for presentations and teaching demonstrations.

The Conner Museum is located in the south end floor of Abelson Hall. It is open seven days a week from 8 a.m. to 5 p.m. (closed major Holidays and during University Closures).
More information can be found at https://cas.wp.wsu.edu/conner-museum/.